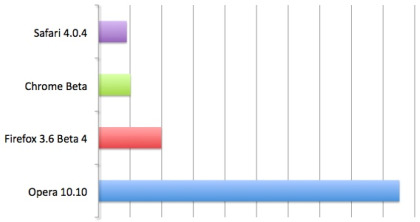 One of the touted features of Google’s Chrome browser, which finally saw the release of an official beta version for Mac yesterday, has been its speed in loading and rendering pages. In investigating that aspect of its performance, Computerworld has found that, while Chrome performs extremely well in the SunSpider JavaScript benchmarking test, it only comes in a close second to Apple’s Safari browser.

According to tests run by Computerworld, the Chrome beta, which Google launched yesterday, is the second fastest of four Mac browsers tested. Chrome renders JavaScript 10 times faster than Opera 10.10 and almost twice as fast as Firefox 3.6 Beta 4, the most recently-released Mac version of Mozilla’s open-source browser.
But Chrome can’t match Safari 4.0.4’s speed: Apple’s browser is approximately 12% faster than Google’s beta.
This contrasts with the Windows platform, where Computerworld previously found Chrome to be the top performing browser in the same testing suite, clocking in at 30% faster than Safari for Windows.